Home Guns My UNCENSORED Thoughts On 3 NEW Guns From Beretta, Salient and Smith... 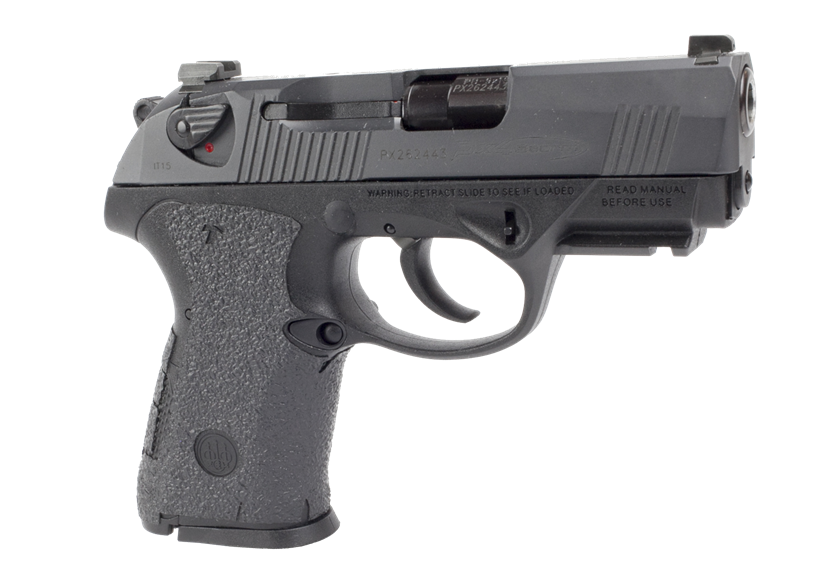 The only thing better is new guns right?

That’s why I was super excited about handling all the new guns at SHOT Show 2017 this year that I could!

Check out these new guns (that look super promising!) from Beretta, Salient, and Smith & Wesson! 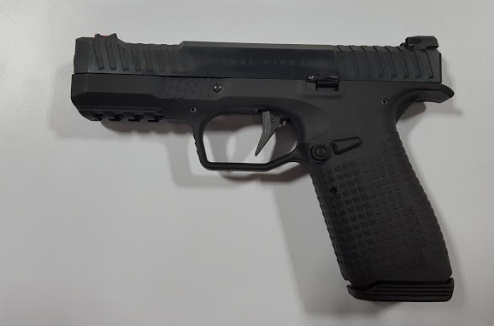 As much as I love new guns, I’m more the “what’s the point?” with new designs. Or “if it aint broke don’t fix it”, but from what I’ve seen this is kind of cool.

Salient is a high-end custom gun maker that — generally — focuses on customizes Glock pistols. They teamed up with Arsenal Firearms to bring this gun to the USA and as a bonus it has a lot of Salient “work” done to it that you would normally have to pay for like the:

… Which, when you think about it — other than the cosmetic stuff Salient does — is kind of the only things they do to Glocks right?

What makes it more interesting is the design, still striker fired but based off a different barrel locking design. Wikipedia explains it this way:

“The Strike One uses a Bergmann System introduced in the Bergmann–Bayard pistol. Unlike the Browning system, the barrel does not tilt. It is locked with a Y shaped part that during the recoil locks the barrel and bolt and half way through it drops, releasing the barrel. The barrel stops its motion, the bolt continues back, ejecting the spent cartridge case and loading fresh cartridge and on its way back the Y shaped locking fork reengages and the barrel and bolt move together forward. Instead of tilting the barrel only moves in a straight line, thus increasing the accuracy. “

Which I don’t fully understand but is still pretty cool because of one thing. The super low bore axis on this gun. In short, as you can see by how “thin” the beaver tail is–you can get a SUPER high grip on the gun. 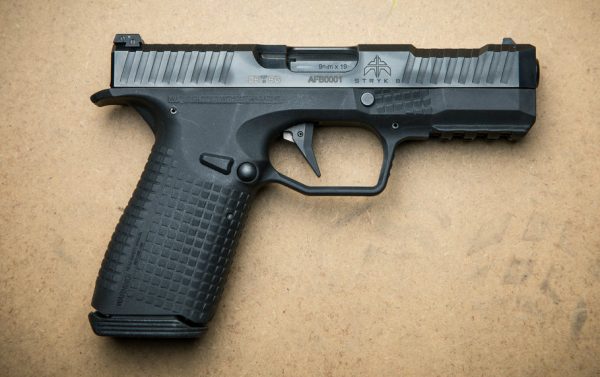 That may not sound exciting but a low bore axis is one of the primary benefits of the Glock platform, because the higher the grip you can get on the gun, the better your shooting performance (speed, pointability and most of all controlling recoil). In fact, Robert Vogel, the champion shooter of champion shooters says “My number one reason for preferring the Glock is the grip I am able to get on the pistol. Because of the grip angle, ergonomics and low bore axis of the pistol I can get a much higher and more secure grip with both hands. This in effect translates into a shooting platform that is more effective in controlling recoil.”

The Stryk B has an even lower bore axis, so if it’s reliable it will be interesting to see if it catches on!

In the video below, the rep at the SHOT Show 2017 booth explains more about the gun: 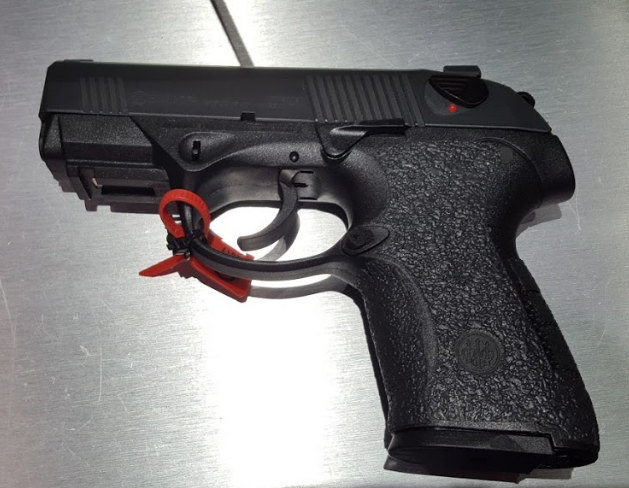 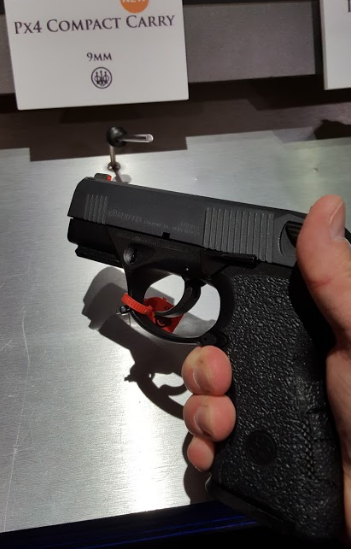 Ernest has been a been a long proponent of Beretta DA/SA pistols for their accuracy, reliability, and safety. I remember reading the original thread where the idea of this gun was born on Pistol-Forum.com called “The PX4 Compact might be my DA/SA Glock 19”.

The PX4 Compact was a natural choice as the base of this project because of its rotary barrel design, ammo capacity and smooth trigger pull. Incorporating the stealth levers, night sights, and a lightened trigger pull makes this flat shooting pistol an ideal concealed carry gun.

From Beretta, “Though it is completely concealable, the Compact offers a full grip for most shooters. The Compact offers full 16 round capacity (15+1 in 9mm), an accessory rail, low-profile slide stop, new integral and retractable lanyard loop, and a cold hammer forged barrel for ultimate precision.”

Honestly, as far as DA/SA pistols go, at about the same size as a Glock 19 this is probably the best option for concealed carry. When you think about it, it ALREADY has all the “custom” stuff you might do to a carry gun done already. Though it’s worth noting there’s a version Ernie is doing with Robar with all their “slick” components. 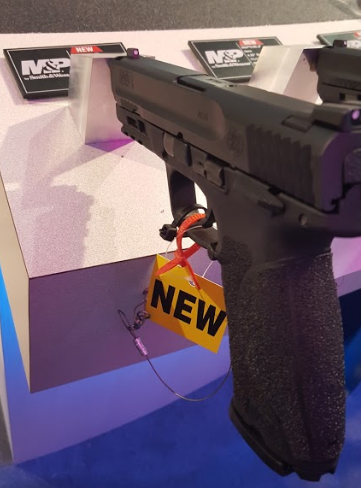 Ah, the Smith & Wesson M&P 9. How I want to love you and how many have and how you have had so many problems too.

To Smith & Wesson the company? Thank you for listening to your customers.

Not sure how many people know this, but the original Smith & Wesson M&P pistols had some serious issues. Not the least of which was accuracy problems because–if I recall correctly the source of the problems–the barrels were bored out off center.

My buddy John Murphy fought with the issues that plagued the M&P for some time before giving up on the platform.

Anyways, the Smith & Wesson M&P 2.0 is a big improvement over the 1.0 for the following reasons:

1. Stiffer frame for less recoil. They added steel into the polymer frame for this. That’s what the “cool looking” window holes are for, you can see the steel underneath.

3. Lightened slide. Because people like this on the polymer guns …

4. New Pro Series Trigger! This was a HUGE complaint of many M&P shooters who could actually … well … shoot. Everyone hated the original 1.0 M&P trigger. Most considered an Apex trigger upgrade a minimum requirement in the gun. The 2.0 comes standard with a pro series trigger.

There’s more too, but those are the things that most people complained about with the original M&P — so it’s nice to point out they’ve been “fixed” with the 2.0.

Do any of these new guns tickle your fancy?

Are you thinking of getting a new gun?

What do you think of the new offerings from Beretta, Salient and Smith & Wesson?

News Flash: Only Fascists Protect Themselves