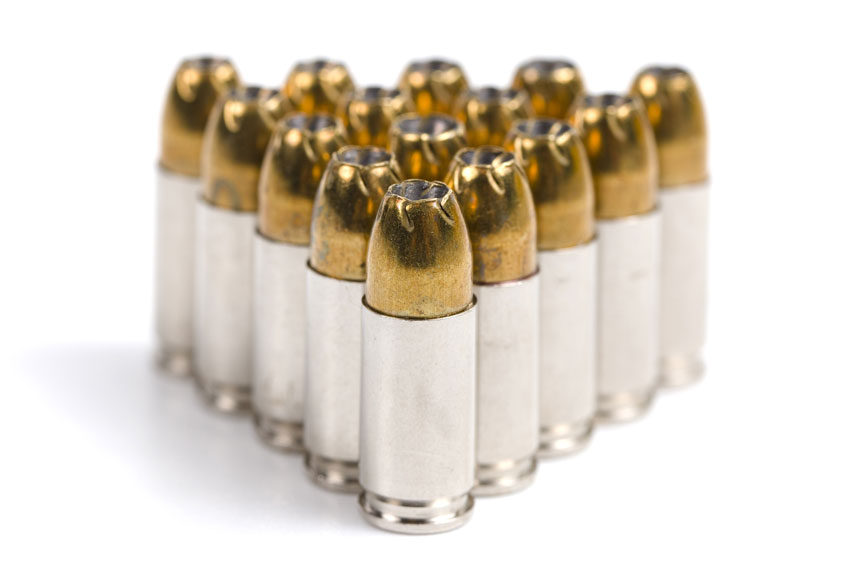 Nothing will divide gun owners like arguing which gun and/or caliber is best.

I quickly learned that with part one and part two of this series on self-defense ammunition.

1.) you want to practice with regular FMJ (full metal jacket) ammo because it’s the cheapest …

3.) because of bullet projectile technology improvements since 2007 practically all service caliber handgun projectiles perform the same, so I recommend people use 9mm because it’s cheaper, easy to shoot, and gives your more bullets in the same size handgun.

4.) Due to years of ballistic and real world duty testing, there are now “official” lists of proven ammo readily available online that you should use when selecting your self-defense ammo.

In short, if it’s not on the list below, then don’t trust your life to it.

Why bigger bullets do NOT guarantee “one stop shots”

The following gel shots by Doug Carr show that when comparing good self-defense ammo from service caliber handgun loads, there are minimal differences in penetration depth and temporary cavity effects  …

Yet, there are still people who want to argue this fact. Even though it is fact, not opinion.

I blame Jeff Cooper, the creator of the “modern technique” of handgun shooting. The shooting world owes a lot to Cooper but a couple of the things he preached just won’t “die”. Namely weaver stance and the .45 being a magical bullet that stops everything.

(We’ll cover weaver stance at some other time that I’m ready to receive fresh hate mail, for now I’ll just say that none of the fastest, most accurate shooters in the world use it these days. That’s a clue.)

Jeff Cooper is credited with quotes such as “any caliber is fine…as long as it starts with a 4 and ends with a 5″ and “the .45 ACP will instantly stop 19 out of 20 attackers”

Now, I greatly respect Cooper, but his beliefs on the superiority of .45 ACP are just unfounded in modern times. He died in 2006, and since that time the  improvement in bullet projectiles has made the caliber debate pointless.

Firearms trainer Greg Ellifritz has said, ” No pistol works that well, and there is very little difference in real world “stopping power” between any of the calibers.  Check out my study HERE.   Most handguns stop fewer than 50% of attackers with one shot.  It will generally take 2-3 shots to bring an attacker down.  Expect that.”

Lastly, I know there are still those of you reading this and about to blow a top because you can’t believe that .45 is somehow not a “man stopper” …

I am about to prove to you scientifically that the 9mm is just as effective as the .45 with today’s modern ammo, but you’ll want to reply with what you know to be true, have seen, or “real world experience” …

Before you do that, you should know about Police Sergeant Timothy Gramin …

Sergeant Gramin used to carry 47 rounds of .45 ammunition while on duty. That was before he got in a gunfight with an attacker who would not go down. The police officer shot the man 14 times with .45-cal. ammunition – six of those hits in supposedly fatal locations.

The final three shots that the police officer fired were into the suspects head — one through each side of his mouth and one through the top of his skull into his brain.

In case you missed that, the officer shot the man 11 times with .45 and then 3 more times in the HEAD before the guy finally stopped fighting.

And lest you try to convince yourself that the attacker was drugged up, to quote the report, “Remarkably, the gunman was still showing vital signs when EMS arrived. Sheer determination, it seemed, kept him going, for no evidence of drugs or alcohol was found in his system.”

The full story can be found here on PoliceOne.com. But the point is that yes, even the .45 caliber will not guarantee you a “one shot stop”.

Oh, and by the way, Sergeant Gramins now carries a 9mm on the job …

” … Now unfailingly he goes to work carrying 145 handgun rounds, all 9 mm. These include three extra 17-round magazines for his primary sidearm (currently a Glock 17), plus two 33-round mags tucked in his vest, as well as the backup gun [Glock 26]”

If you are still convinced that your .45 is better, then there’s nothing I can say now that will convince you otherwise, so let’s just get to the list (which includes .45 anyways)  …

Whether they credit him or not, the entire shooting world–definitely online–owes a lot of gratitude to one Dr. Gary Roberts (aka DocGKR) from FirearmsTactical.com. He is a subject matter expert (SME) on terminal ballistics and much of the testing of modern ammunition we have online comes from him.

He has an approved list that is posted on online forums and is updated as new loads are tested of the “best list” of approved ammo.

Along with the above picture comparison of all service caliber ballistic testing above, DocGKR also says this …

“As you increase bullet size and mass from 9 mm/357 Sig, to .40 S&W, to .45 ACP, more tissue is crushed, resulting in a larger permanent cavity. In addition, the larger bullets often offer better performance through intermediate barriers. For some, the incremental advantages of the larger calibers are offset by weapon platform characteristics. As is quite obvious from the photo above,NONE of the common service pistol calibers generate temporary cavities of sufficient magnitude to cause significant tissue damage. Anyone interested in this topic should read and periodically re-read, “Handgun Wounding Factors and Effectiveness” by Urey Patrick of the FBI FTU, as this remains the single best discussion of the wound ballistic requirements of handguns used for self-defense — it is available at: http://www.firearmstactical.com/hwfe.htm (link is now dead, it has been re-posted here )”

And gives the following picture to confirm the size difference is truly minimal between mushroomed hollow points:

The good doctor goes on to say this to introduce the list. (NOTE: You can click the link for any of these ammunition loads to check if they are in stock at LuckyGunner.com!) …

Keeping in mind that handguns generally offer poor incapacitation potential, bullets with effective terminal performance are available in all of the most commonly used duty pistol calibers—pick the one that you shoot most accurately, that is most reliable in the type of pistol you choose, and best suits you likely engagement scenarios.

The following loads all demonstrate outstanding terminal performance and can be considered acceptable for duty/self-defense use:

— Bullet designs like the Silver Tip, Hydra-Shok, and Black Talon were state of the art 15 or 20 years ago. These older bullets tend to plug up and act like FMJ projectiles when shot through heavy clothing; they also often have significant degradation in terminal performance after first passing through intermediate barriers. Modern ammunition which has been designed for robust expansion against clothing and intermediate barriers is significantly superior to the older designs. The bullets in the Federal Classic and Hydrashok line are outperformed by other ATK products such as the Federal Tactical and HST, as well as the Speer Gold Dot; likewise Winchester Ranger Talons are far superior to the old Black Talons or civilian SXT’s.
—————————————-

Here are some useful resources:

What if your ammo is not on this list?

In fact, I could not find the +P loading at all last time I bought self-defense ammo so I’m carrying standard pressure Speer Gold Dot 124 gr JHP and it’s fine.

I would say that you are “most likely” going to be safe if you carry any defensive JHP round from Speer Gold Dot, Federal Tactical/Bonded or Winchester Ranger T — as they consistently find their way onto the list. The only other caveat is to generally choose the heavier bullets (for example, with 9mm – usually avoid the 115gr and go with 124gr or 147gr, etc)

That said, if you can find the ammo on the list just get one of the ones on the list and then stop worrying about it!

Save yourself the headache and definitely do NOT not choose one of these rounds because you want to use whatever the newest, latest and greatest “just invented, guaranteed man stopper” bullet just came out.