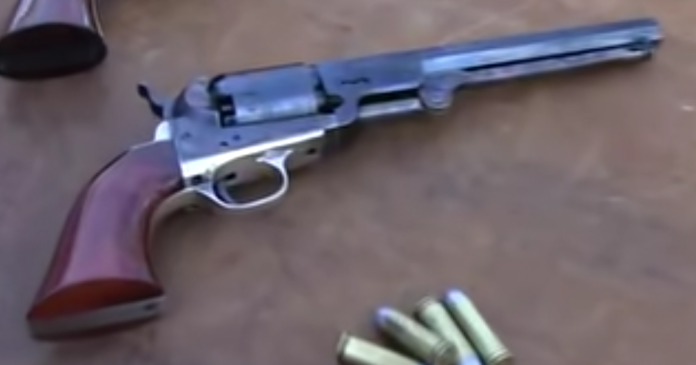 If you haven’t taken the time to research the history and the technological development of firearms, it can be a fascinating study. One reason is just how amazing the differences between older firearms models and the current newer technology sometimes is. A second reason is to realize how much changes in firearms technology affected history (if you’re a history buff like me).

A third reason, though, is that it can be a real surprise how similar, in some ways, older firearms technology is to “newer” technology in terms of their usefulness.

To clarify what I mean by this third point, let’s take a look at a classic revolver which was incredibly popular in the days of the post-Civil War old west: the Colt 1851 Navy. Sheriff Jim Wilson writes,

Manufactured from 1851 to 1873, the Navy was a 2 1/2-pound, single-action revolver with a 7 1/2-inch barrel. It was chambered in .36 caliber and could be loaded with conical bullets or round balls. In the 22-year period of manufacture, Colt produced over 200,000 of the guns, making it one of the most popular Colt revolvers ever.

Now, there’s nothing in this information, so far, that might catch your eye in terms of similarity to modern firearms’s performance. It is interesting, though, that Wilson notes that famous folks such the Texas Rangers and explorer Sir Richard Burton favored the 1851 Navy.

But when Wilson starts discussing “Wild Bill” Hickok, it might get your attention. Wilson writes,

In 1865, Hickok had a difficulty with Davis Tutt in Springfield, Missouri. Some say it was over a woman, while other suggest it was caused by a gambling debt. Regardless, they met one morning on the town square. Tutt took a shot at Hickok as soon as Wild Bill came into view, and Tutt missed. Hickok raised his 1851 Navy and fired one shot, hitting Tutt in the heart at approximately 75 yards.

Think about that: while being shot at, using a revolver, Hickok hit his adversary in a vital organ at 75 yards. Many shooters these days would be happy to hit a target on a range at that distance with a modern pistol, but that’s not while being shot at.

Then, there’s also the power of the cartridge in the 1851 Navy. Again from Wilson:

In my ignorance, I have always equated the .36 caliber Navy with the standard velocity .38 Special cartridge as far as power and performance goes. Well, excuse me!  Further study shows that the 1851 Navy would send an 80 grain ball downrange at somewhere between 900 and 1000fps. My friends, that is .380 ACP performance.

That’s right, the 1851 Navy had acceptable stopping power by today’s standards for defensive gun use.

And, at the time of this writing, the design for that revolver is 121 years old.

In some ways, the more things change, the more they stay the same. I can’t always say that about all pistol designs, but the legacy of the 1851 Navy in terms of power and accuracy certainly seems to be what current manufacturers are aiming for. It is a fascinating firearm with a fascinating history.

Didn’t We Already Do This? Moms Want To Ban Selling Firearms...