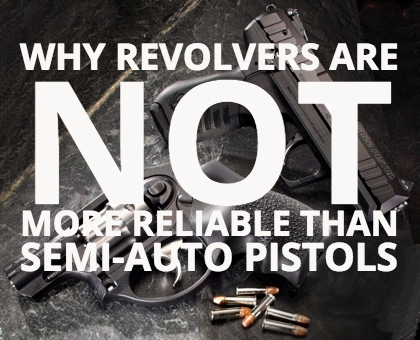 I wasn’t even a teenager and my father had taken the family out to West Virginia where we were attending an informal “pistol competition”. (It was basically just a row of steel pepper poppers and a table of bowling ball pins that you shot head-to-head against the other guy but to me I thought it was obviously the coolest place in the world.)

Anyways, one of the ‘old timers’ there was talking to my mom about self-defense guns–this must have been in the 90’s when concealed carry was first becoming popular.

The old timer told my mom “You know, revolvers are actually more reliable than semi-autos … because if you have a misfire … you just pull the trigger and the wheel rotates to the next round. All you have to do is keep pulling the trigger …”

To my young, impressionable brain — that made all the sense in the world.

And you still hear it today that “wheel guns” are more reliable than modern semi-auto pistols … but is it true?

As I’m about to show you, that’s not the case at all …

Where the myth of revolver reliability comes from …

Tom Givens recently explained to me where this myth comes from. This is why it’s so great to train with a guy like Tom who has “seen it all” and also knows the history behind these things:

“The old crap about revolvers being more reliable than autos arises from the ammunition that was available when autos first appeared in military and police service, circa 1900.

Ammunition of that day had unstable primers that deteriorated quickly when exposed to gun oils, solvent vapors, and just ordinary exposure to weather while carrying the loaded gun and ammo on the belt. The primers of that day contained mercuric salts, which gather moisture form the air and cause corrosion. These “corrosive primers” made cleaning the gun the same day it was fired and absolute necessity. If the gun was not cleaned immediately the mercuric salt deposits in the barrel would gather moisture and cause rust overnight.

Unfortunately, these mercuric salts in the primer gather moisture when ammunition is being worn on the belt and often failed to fire when needed. This is no longer an issue as these mercuric primers have not been in use in the US since World War II.

Modern primers contain lead styphnate, not mercuric compounds. Modern primers are far less susceptible to oils, solvents, and the weather. However, when auto pistols first became common the mercuric ammunition was all that was available and misfires were common. If a revolver misfires the user simply pulls the trigger again and a fresh round comes up for another try. If a cartridge in a semiauto pistol misfires the user must perform an immediate action drill to get the gun back in operation. With modern ammunition a properly maintained semiautomatic pistol is about as reliable as a machine can be.”

So there you have it …

In an age, OVER 100 years ago, when ammunition was less reliable — and the most common fight stopper was a bullet that did not fire (failure to fire) — the revolver was thought of as more reliable because all you had to do was pull the trigger again instead of tap, rack, bang with a semi-auto.

Now, with more reliable ammo — is the revolver still reliable?

Reason #1: Five or Six chambers instead of one …

An auto pistol has one chamber attached to one barrel. A revolver has one barrel and 5 or 6 individual chambers that have to line up precisely with the barrel in order for it to fire. If due to wear and tear or whatever else, these chambers are off by even a thousandth of an inch, a bullet could shave off a forcing cone or misalign with the firing pin and you’ll get misfires.

Reason #2: More parts = More chances for something to go wrong

In addition to the 5 or 6 chambers that have to precisely line up with the barrel each and every trigger pull, the internals of the revolver are no laughing matter. If you crack it open and look inside, it’s like looking at the inside of a watch.

And like a watch, there are plenty of opportunities for these interacting parts to malfunction or get “out of time” causing failure. Compare that to a modern semi auto pistol like the Glock with only 34 component parts (the smaller number of parts reduces potential for technical problems because there are less chances for something to go wrong).

Reason #3: Most Revolver Failures to Fire are “Jams” Not “Malfunctions”

JAM – a serious stoppage that normally involves a broken part or something of that nature that would require tools to fix.

MALFUNCTION – some interruption of the firing cycle that can be remedied simply and/or quickly.

When the primary reason for a failure to fire, 100 years ago, was bad ammo — the revolver was reliable because you just had to pull the trigger again.

Now days, ammunition is more reliable so let’s look at what else could go wrong with a revolver. These are ALL reasons that a revolver could fail to fire:

*** Excessive fouling under the extractor star can lock up a cylinder (it won’t turn, won’t rotate to the next round).

*** Recoil can cause bullets to wiggle their way out of the shell casing which can also prevent the cylinder from rotating.

*** The ejector rod can work itself loose and cylinder won’t turn.

*** During reloading you can get incomplete extraction and cases stuck under the extractor.

*** Strain screw in front strap of grip can loosen over time, if it backs out enough, the firing pin strike will be too light and won’t ignite primers — failure to fire.

And almost ALL of these are very, very hard to fix in a fight. In fact, it’s practically impossible. They are true “jams” that require tools to fix.

So are there any benefits to a revolver?

If you are involved in a hands on fight and you put the barrel of the revolver up against a person — as in contact-to-contact pushing the barrel into their body — then you can shoot the revolver multiple times from this contact position. In most (all?) semi-auto pistols — pushing into the barrel like this will put the gun out of battery and it won’t fire.

It’s important to remember that the revolver is old, old, OLD technology …

The 1911 semi-auto pistol is itself a design from over 100 years ago, making it obsolete. The revolver design is even older!

The truth is that there is a reason the military switched long ago to autos … and that it has been decades since police have been issued revolvers … because technology has given us better tools.

Look at it this way …

The Ford Model T — the first car — was first built around 1908 and NOBODY would argue that a model T in any way out performs even the least reliable of today’sautomobiles. Yet, this is around the same time that the 1911 semi auto REPLACED the revolver for military service.

The revolver is a victim of the technology of its time and is in no way more reliable than modern semi auto pistols.

Hey, if you like your “wheel guns” you can keep em’! Just don’t pretend they’re on par with guns that are the pinnacle of modern technology today 🙂