Home News You are NEVER out of the fight (but you NEED to get... 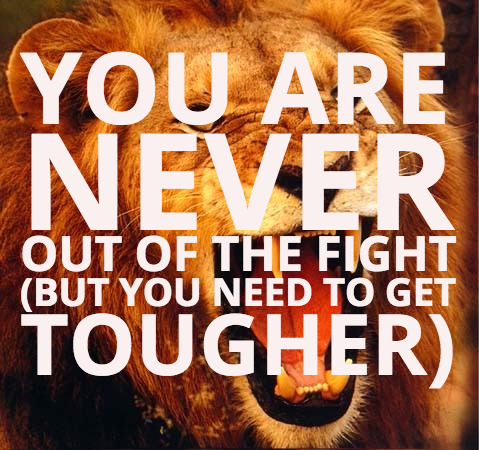 Most Americans are soft.

There. I said it.

America was built on hope, tenacity, grit and NEVER giving up until what needed to get done … got done.

Unfortunately, it seems that a combination of incredible advancements in technology and the systematic indoctrination provided by state sponsored education has all but bred out the self-reliant nature that characterized the American of decades past.

I bring this up because I took another shooting class this past weekend and the instructor mentioned the “Warrior Mindset” which he basically defined as doing whatever it takes to win. Period.

Are you hurting? Who cares.
Are you injured? Shot? Keep fighting.
Feel like quitting? Quit when the job is done.

I bring this up because:

1.) New research is proving I’m right. More on that below …

2.) Four Americans (and one Briton) showed warrior mindset recently during a terrorist attack and saved potentially dozens of lives by responding unarmed.

They’re heroes and I’ll tell you why you need to be (and can be) more like them.

Four UNARMED Americans, and One Briton Take Out AK-47 Wielding Terrorist On a High Speed Train

A terrorist whipped out his AK47 on board a high speed train — with over 500 passengers — that was traveling from Amsterdam to Paris on Friday, August 21, 2015.

Johnny Jihad* decided he was going to slay some unarmed civilians that were riding on this train. My guess is the Charlie Hebdo attacks went so well in Paris, that he thought he was going to have a much higher body count considering all 500 of his intended victims were locked inside a high speed steel tunnel o’ death (If you know anything about bullet richochet dynamics — one guy with a rifle in a long, long tube full of people can do a LOT of damage).

Details are still hard to put together (as is often the case shortly after these events happen) but here’s the basic story as I understand it:

The Terrorist pops into the train car with his AK47 …

A french-American civilian named Mark Mooligan (from my home state of Virginia!) was one of the first to react. Moogalian made sure his wife was behind a seat before confronting the gunman (it’s unclear at this point, but it appears an unamed frenchman might have tackled/charged the gunman first).  Mooligan wrestled the Kalashnikov from the terrorist, who then drew a sidearm and shot Moogalian in the neck before taking back the AK47.

National Guardsman Skarlatos, of Roseburg, Oregon, said the first thing he heard was a gunshot.

“Just hit me on the shoulder and said ‘Let’s go.‘”

U.S. Airman Stone, his friend, of Carmichael, California, said said he was waking up from a deep sleep (by the gunshot no doubt) when Skarlatos “just hit me on the shoulder and said ‘Let’s go.'”

Stone and Skarlatos moved in to tackle the gunman and their friend, a civilian, Sadler moved in to help.

“All three of us started punching” him, Stone said. Stone, who was stabbed in the neck and sliced on his hand, said the attacker kept pulling out weapons from his bag (like the boxcutter he cut him with) as he was in the process of choking the terroist unconscious.

Once they had the bad guy tied up and under control, U.S. Airman Stone went and helped stop the bleeding on Mooligan’s throat gunshot wound. Stone said he “just stuck two of my fingers in his hole and found what I thought to be the artery, pushed down and the bleeding stopped.” He said he kept the position until paramedics arrived.

A Warrior Mindset Is Way More Important Than Being Armed.

Given the choice, I would of liked to have a gun in that situation. Then I could of “air mailed” violence into the bad guys center mass and ocular cavity.

But the point is that 3 or 4 unarmed people decided that they were not victims.

They saw a bad guy starting to use violence against themselves and other people, so they rushed him and delivered heaping doses of violence on him instead.

It didn’t matter that they were unarmed because they decided not to be victims.

Their mindset was critical. Sadler said, “At that time, it was either do something or die.”

“He kept pulling more weapons left and right,” said Stone, his arm in a sling from injuries suffered in the struggle. “He seemed like he was ready to fight to the end. So were we.”

The 62 year old Briton told reporters that, once he got over his initial fear when the gunman emerged and opened fire, he decided to act, telling himself: “I would rather die being active trying to get him down than simply sit in the corner and be shot.”

The point? Choose right now you will never be a victim. If you are ever faced with violence, fight back viciously. Never give up.

The Problem Is That Most Americans Have Lost Their Grit and Toughness.

There is a ton I could say about this, but basically Americans today are soft and it will get you killed.

There is even a ton of research being done right now proving (as if it’s not obvious) that being tough and trying harder are the keys to success in anything.

Angela Duckworth of the University of Pennsylvania wrote a paper saying grit, not IQ, was the best predictor of success. The authors cycle back several times to the “marshmallow study,” which found that small children who could resist eating a marshmallow for 15 minutes on the promise of getting another were more likely to have life success than their more impulsive peers.

Asian Americans, they argue, succeed not because they have higher IQs, but because they spend less time watching TV, playing soccer, and hanging out at the mall, and more time drilling their times tables, practicing their violins, and reading. The authors’ highlight the research showing that Asian students with an IQ of 103 get higher grades than white students with the same IQ.

You will NOT rise to the occasion

If you’re my typical reader, you are reading this going “yeah that’s right, I’m tough too and I would fight back”.

But would you? But you’re probably overweight. You most likely haven’t sparred or hit or grappled or wrestled with anyone in a long time (if ever). And you may not be able to perform like you think you can even if you had a gun (because you don’t practice).

In other words, you’ve basically spent your entire life giving up. And you think you’re going to magically rise to the occasion — and not give up — during a crisis when it’s the HARDEST time to do so?

But you may still be right. Maybe. And you might get lucky and there are 3 other 20 something dudes there to help you fight back (like the 62 year old Briton). Or the bad guy could be inept and not willing to fight harder than you.

The instructor at the last class I took pointed out that past athletes or men that spend their early lives doing HARD STUFF do dramatically better at all special operations selection courses.

The Navy even commissioned a study aimed at determining which high school and college athletes had the best potential to graduate from the SEAL training course. Capt. Adam Curtis, SEAL recruiter said:

“We analyzed 10 years of BUD/S training data and interviewed successful and unsuccessful candidates to distinguish characteristics of young men more likely to finish training. We found that seven sports – water polo, triathlon, lacrosse, boxing, rugby, swimming and wrestling – have athletes who are more likely than average candidates to succeed.”

I will bet you dollars to donuts that the particular sports — other than being hard — have nothing to do with it.

The point is that kids that grow up doing hard stuff, like staying dedicated to a physical sport — even when it sucks — grow up to be hard, gritty, successful adults. Period.

You Can Do It Too, But You Need To Build The Warrior Mindset Everyday

Challenge yourself. Build your resilience. Do hard stuff.

Stop watching so much TV.

Are you overweight? Start working out. Will it suck at first? Sure, because you’re soft.

Go on a diet. Yes, it sucks. Good. Embrace the suck. Stop taking it easy on yourself.

Get pissed when you see a terrorist attack like this happen and make an effort to go get in shape and train your mind and body to be ready. Adopt the warrior mindset.

P.S. * Johnny Jihad is not the terrorist’s real name.

P.P.S. “Somewhere a true believer is training to kill you.  He is training with minimum food and water, in austere conditions, day and night.  The only thing clean on him is his weapon.  He doesn’t worry about what workout to do — his rucksack weighs what is weighs, and he runs until the enemy stops chasing him.  The true believer doesn’t care how hard it is; he knows that he either wins or dies.  He doesn’t go home at 1700; he is home.  He only knows the cause.  Now.  Who wants to quit?”

— Attributed to NousDefionsDoc, admin for the Professional Soldiers forum.