Home Guns What Is An Acceptable Level of Combat Accuracy (And Do You Measure... 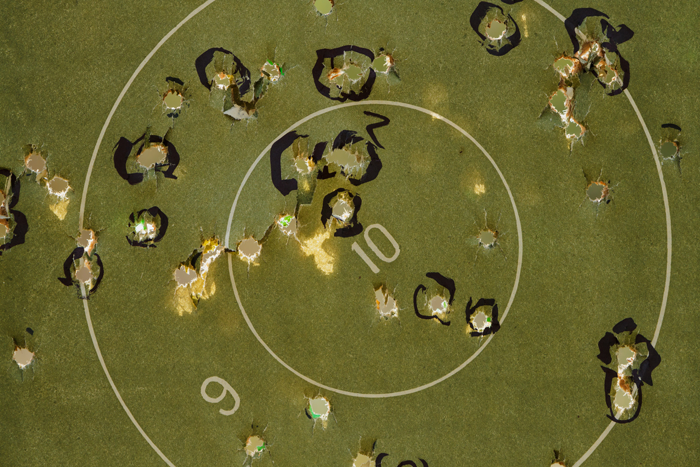 The first couple of times I heard the words “combat accuracy”, I had to laugh.

Why is that? Because a lot of times it’s used by internet tough guys to defend their total lack of accuracy. It’s not actually a standard that they strive for.

In short, they usually can’t hit what they’re aiming at and when there’s bullets all over the target — they call it “combat accurate”.

What Is Combat Accuracy?

The idea behind “combat accuracy” is an acceptable level of accuracy for combat. Makes sense right?

In combat, you’re not judged by how many times you can take precision shots into the X ring inside the 10 circle on an NRA bullseye target, you’re simply trying to get the job done.

The job you are trying to “get done” is to win the fight.

To do that, you generally have to stop the threat.

When it comes to stopping the threat, as I explained here on “Why Shot Placement Is King” — you need to hit vital zones.

What it amounts to — when aiming for “vital zones” on the human body — is roughly a 3×5 card size area in the face of an attacker, and roughly a 7″ wide by 9″ tall area in the upper chest representing the heart area.

That’s much different than trying to score the highest score on a bullseye course by being as precise as possible.

What Combat Accuracy Is Not

In short, combat accuracy is not an excuse to shoot really fast or with no control — all over the target — and think that you’re ok because being “combat accurate” or “Tactical” means you have an excuse for no accuracy.

In the words of John Mosby:

“Worse yet, in my mind, are those who have, in some circles, long pushed the concept known as “combat accuracy,” that has been equally abused. I don’t know where this concept actually originated. I do know that I first heard it used by blindly loyal advocates of “pointshooting,” as an excuse for their inability to shoot with a degree of accuracy greater than “minute of the entire fucking target.” Generally, in my experience, in the ensuing years, it has come to mean something along the lines of “well, if any of my guaranteed-lethal, buffalo-slaying, forty-something caliber bullets hit that bad guy anywhere, his damned head’s gonna blown plumb off’n his neck! I’m ‘combat accurate’ and these here rounds is guaranteed to pole-ax a gol-durned horse!””

Like John said, a lot of guys hide behind the caliber debate because they’re not good shots. This meme, to wit: 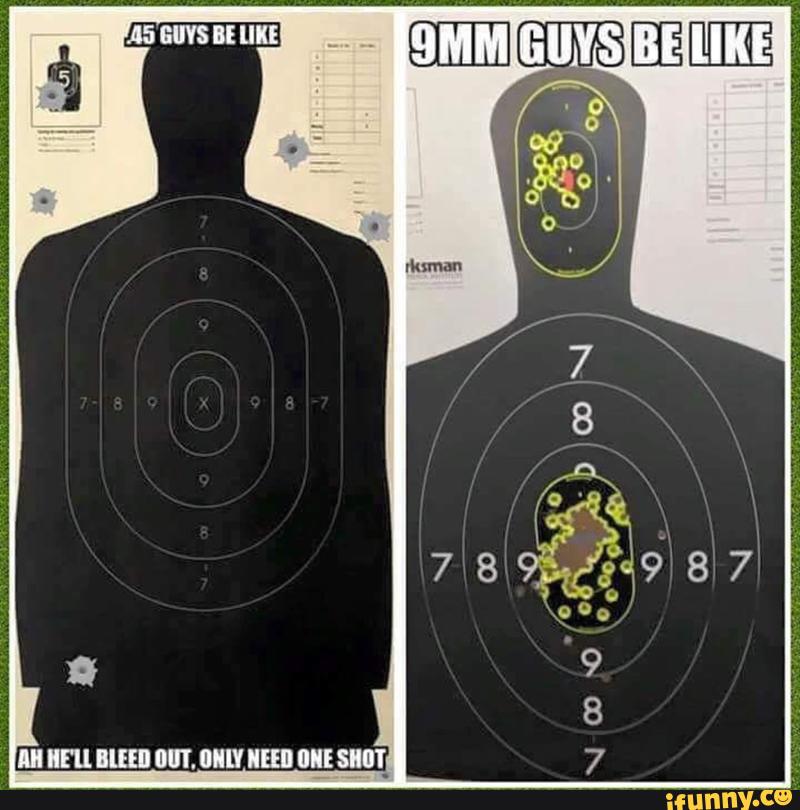 What Is An Acceptable Level of Combat Accuracy?

Besides aiming for an being able to hit the vital zones mentioned (and which you can practice with well-made humanoid targets), here’s something to think about to judge your progress …

Former Navy SEAL and current firearms trainer Kyle Defoor wrote an article talking about how 4″ is a interesting standard:

“It occurred to me the other day that the number 4 has a significant meaning in the world of shooting accuracy both with pistol and carbine. This came about after a service member emailed me from OCONUS and asked for measurements of a certain target so they could improvise making one and shoot some of my tests. I kept this under my hat for a few weeks until I could prove or disprove my theory. Ended up that my first thoughts were correct. I kept track of the group sizes of a diverse group of shooters. Obviously, all were good enough to actually be measured. So here goes-

The gold standard for pistol accuracy is the 25 yd line. The most common target at that distance is an NRA B-8 which has a 5.5″ bull. The best shooters I was around and myself routinely had a group size of right at 4 inches on that target. Even when some guys would have an awesome few rounds, they would throw one or two and the average over 3 to 5 different shoots was still 4″.

As for carbine, in my classes I use the same NRA B-8 at 100 yds for zeroing and accuracy work on short ranges. When I have a 200 yd range I go to a NRA SR-42, which has a 12″ bull. Keep in mind that pretty much all NRA tagets are based on the principle of the bull being the width of the front sight post for the weapon and distance that the target was designed for (this in itself has proven to be a huge time saving factor in training, especially for accuracy , over the years. We should all thank the guy who figured this out).

No matter the distance, either 100 or 200 on the above respective targets the normal group size again after 3-5 shoots was an average of 4 MOA (minutes of angle), which equals 4 inches at 100 yds. and 8 inches at 200 yds. Another interesting point here is that the Appleseed Shoot, which is based on the old ‘rifleman’s qurater mile’ of 500 yds is also based on 4 MOA.

As for the guns, none of them were super tricked out, just the normal combat modifications. Interestingly, even the 4 power optics like my new scope didn’t really improve the group size that much on non-accurized rifles.

The idea here is that Kyle is not talking about 4MOA being the standard of precision accuracy. He’s talking about it being the standard you aim for during combat type drills. In other words, as fast as possible. (Kyle regularly posts pictures on Instagram where he achieves stuff like a 95 score on the NRA bullseye from concealment at 25 yards in 10 seconds.)

Do You Measure Up?

There you have it.

Those are some pretty good standards I think …

Or are you using the idea of “combat accuracy” as an excuse when your shots are all over the paper?

BIZARRE: Two-Faced Biden Admin Approves For 1 Foreign Country What They...