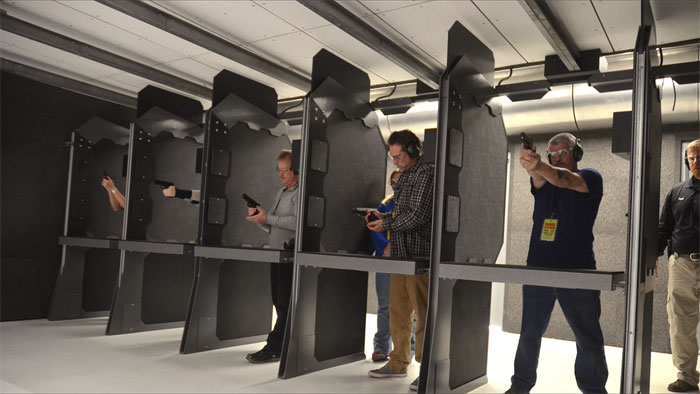 This is the first installment in a series that I’m going to start about “Stupid & Dangerous Gun Handling Mistakes”.

You need to immediately read this article to make sure you’re not making this mistake!

Understand I’m not making fun of you, or anyone else that makes this mistake (or others like it) — what I’m doing is pointing out the problem that you may or may not know you have so you can fix it.

Fix these problems and you’ll make yourself more effective, more efficient and safer to everyone around you.

Maybe this should not be part 1 in the series. Maybe a better part one in this series should be my article on the ONLY two things you can do with a gun when you pick it up: clear it or shoot it.

But this is definitely up there on the list of gun handling mistakes.

Most People Drop Their Heads & Guns Down Low When They’re Not Actively Shooting!

This affects a lot of people, but definitely beginners are the most guilty of this.

When something happens with their gun that is “not shooting” whether that’s reloading it, fixing a malfunction, unloading it, etc — they drop the gun down and bend — at least their head — down to try to fix the gun.

For example, look at these two completely random pictures that I grabbed off google images. Look at the two guys here that are not in the current action of shooting — they have their guns down low, and they are looking down at the guns (thankfully, they’re keeping the muzzles in a mostly safe direction)

And this one is a view from the back — another totally random picture — but see how 3 out of 4 people here are CLEARLY looking down messing with their guns in some way? 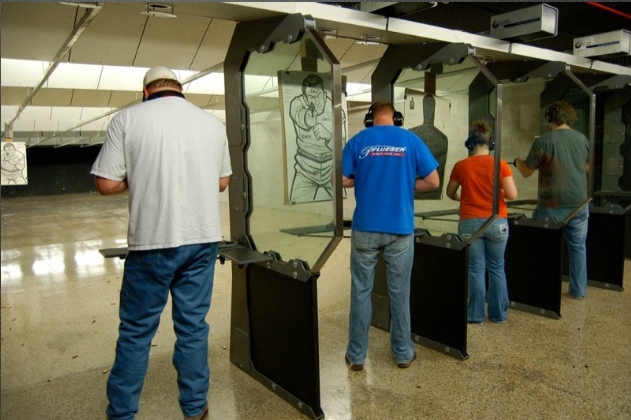 And finally, while looking for pictures for this post on my stock photo site, I found the PERFECT example of this in a stock photo entitled “man in white suit reloading gun” and you can see he makes the two big mistakes — lowers the gun down to mess with it (reload in this case) AND he has his finger wrapped around the trigger. Most people, with no training, will do this again and again and again (this guy is obviously a model, with no training, who was handed a gun and told “reload this thing while I take a picture of you”.) 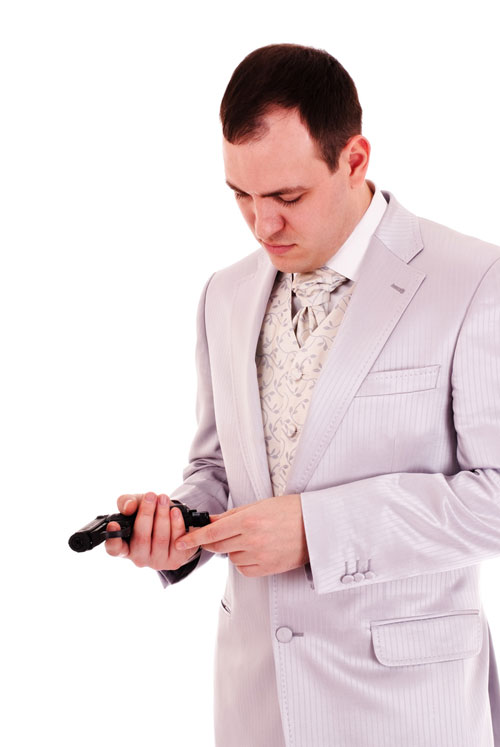 This is a HUGE and COMMON mistake that most everyone who is not trained to avoid makes.

All Gun Manipulations Should Be Done In Your “Workspace”

I caught this Instagram post by the one and only Mike Seeklander the other day and it got me to thinking about this mistake. Check it out:

A quick tip on a subject I see lots of shooters getting less than correct! Start by learning where and how to manipulate! Stay tuned for more tips….and share! #wilsoncombat @wilsoncombat @artofmanliness

Mike’s post got me to thinking — this is a HUGE mistake that I see with a ton of people when they’re “running” their guns on the range, shooting classes, etc.

It happens ALL the time with beginners.

And it is NOT just with rifles/long guns (though you typically see it a lot more “pronounced” with long guns because they’re so much heavier than handguns).

People do this with their handguns too.

Do NOT Drop Your Gun Down, Keep It In Your “Workspace”!

If you are shooting your pistol or rifle or shotgun it’s out extended pointing at the target.

If you stop shooting to manipulate it in ANY way — fix a malfunction, reload it, etc — then you need to keep the gun in your “workspace”.

The “workspace” is typically defined as the area roughly in front of your face — the area you can see without moving your head up or down.

Also, as you’ll see in just a moment, bringing the elbow of your firing grip arm in to touch your rib cage generally brings either your pistol or long gun into your “workspace” without you even trying.

Tactically, this allows you to visually see what’s going on down range — aka the place you were just shooting at a threat — with your peripheal vision even as you manipulate your weapon.

Safety-wise, this allows you to keep your eyes on the MUZZLE of your gun (that’s the end of the barrel, the dangerous part where the bullets shoot out of) and follow firearms safety rule #2 – not pointing your muzzle at people/things you do not want to shoot.

Effectiveness and efficiency wise, this will make you faster and more efficient at manipulating your firearm and get you back into the fight faster and you’ll be more “ready” during the shooting.

And social-proof-wise, you’ll look like less of a dumbass and more like you know what the hell you’re doing when you’re on the range 🙂

Check out this video from James Yeager on How To Reload Your Pistol and Rifle.

I may disagree on some minor points he makes, but what I want you to notice one BIG thing:

No matter if he’s manipulating a handgun or a long gun, he has the SAME body mechanics–he brings the elbow of his firing hand arm back into his rib cage to keep the gun in his workspace–then either taps/racks or reloads as needed.

Dave Spaulding is a wealth of knowledge that I hope to tap in the near future by taking a class from him. He’s one of those guys that’s been around a LONG time, so he has a unique perspective that I always learn from every time he talks.

In this video, he talks about the “Arc of Ready” with handgun combatives (not a coincidence that’s the name of his company!)

Notice that keeping the gun in your workspace keeps the gun in or near this “arc of ready” automatically — pay particular attention to the last minute or so when he discusses how the multiple ready positions share continuity of actions with the “workspace”.

Do You Make This Mistake?

Do you remember the last time you went to the range or shot your gun or manipulated it in any way?

Did you make this mistake?

Have you made it in the past?

Either way, you now know how to fix it — keep that gun in your workspace and watch your skills improve!