Inflation seems to hit everything in our economy. The price of everything is going up, and this effects even the basic things of life. As in, not just food and utilities, but the price of guns.

Many manufacturers look to use alternate materials (polymers) in an attempt to lower the manufacturing costs and, therefore, the price of the weapons which they are building. Occasionally, though, something surprises you, such as when a manufacturer can create and an all-metal compact 9mm with a street price of around $360.

Turkish manufacturer Canik has made this gun, and it is distributed in the U.S. by TriStar as the TriStar C100. Eve Flanigan writes,

The TriStar C100 has an all-aluminum frame and weighs 37.3 ounces unloaded. Its barrel is 3.7 inches. It’s not light, and it’s not tiny. However, it is compact enough for carry, and the weight helps make it a low-recoil shooter. It’s shipped with two metal 15-round mags, the followers of which are the only plastic components I can find on the gun.

Some will call this pistol a CZ clone, and, in fact, Mike Searson writes that he was “convinced that we had a genuine CZ in hand when we took it out of the box.” Searson, like Flanigan, likes the C100, but Searson also adds this caution about this pistol:

Despite the serrations on the slide, if you are not familiar with the CZ-75 design, it can take some getting used to. We are a fan, but as we do not shoot pistols with slides inside the rail very often, it always takes us a bit of time to regain the muscle memory on manipulation.

So, essentially, you’ll have to adjust to the feel of this gun, but this will be true of any style of weapon that you begin to use when you’ve been primarily shooting with another design. Having said that, though, Fred Mastison was pleasantly surprised at the feel of the gun. He writes,

Handling the C100 was a very pleasant event. In fact, I will confess that I did not expect the gun to be as nice as it proved to be.

All-in-all, though, the C100 received praises for it’s accuracy, design, and price point, so, if you’re considering a compact pistol (and aren’t buying based on conductibility), then this weapon is worth taking a look at. 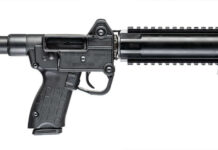 Democrats Hate This Member Of Congress Because She Won’t Be The...