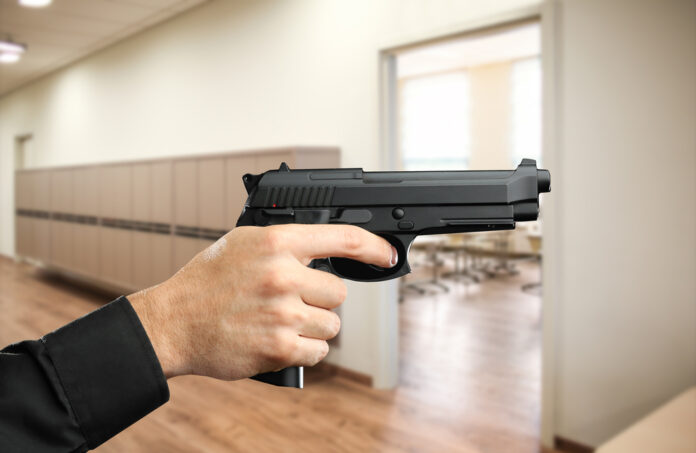 When social justice warriors and the like try to shove something down our collective throats, it’s usually sold to us under the labels of “compassion,” and we’re told that it’s “for the children.”

Certainly, the push for gun bans is nearly always sold to us as being a push to protect the children from such horrible things as school shootings (never mind that these same people tend to be the ones insisting that you send your kids to their sitting duck target range… er… their gun free zones for easy targets… er… their schools instead of allowing options for education to parents).

So, here is the problem with the school shooting information which anti-gunners keep putting out there to push for more and more gun control: it’s bogus. That’s right, the statistics that they use are deceiving. Tyler Durden writes,

In reality, despite a tidal wave of misleading propaganda, the number of school shootings has fallen sharply over the past 30 years.

But anti-gun activists in government and the media have done their best to persuade people otherwise.

Last year, the federal Education Department reported that “nearly 240 schools … reported at least 1 incident involving a school-related shooting” in the 2015-16 school year. National Public Radio investigated and found that the feds had exaggerated school shootings by twentyfold; NPR could confirm only 11 incidents. Cleveland was credited with 37 shooting incidents, when in reality it was simply a report of 37 schools that noted “possession of a knife or a firearm.” In DeKalb County, Georgia, “a toy cap gun fired on a school bus” counted as a school shooting. One school system was listed as a shooting locale for an incident involving a pair of scissors. NPR noted,

“Most of the school leaders NPR reached had little idea of how shootings got recorded for their schools. For example, the [federal Civil Rights Data Collection] reports 26 shootings within the Ventura Unified School District in Southern California. ‘I think someone pushed the wrong button,’ said Jeff Davis, an assistant superintendent there. The outgoing superintendent, Joe Richards, ‘has been here for almost 30 years and he doesn’t remember any shooting,’ Davis added.”

Even the leftist news site Vox noted, “The risk of a child getting killed by someone else at school in 2011, the last year for which there’s final data, was about 1 in 5 million.” Vox again: The rate of “serious violent victimization” among students — rape, sexual assault, robbery, or aggravated assault — was about 1 in 1,000 in 2011, down from 1 in 100 in 1995. In 1995, 10 percent of students were victims of some kind of crime at school; in 2011, just 4 percent were.” Northeastern University criminologist James Alan Fox observed, “We over-obsess about school shootings. Surveys show the majority of students are afraid there will be a mass shooting at their school. These are rare events — scary though they may be, tragic though they may — and we shouldn’t over-respond.”

Think about these statistics. Anti-gunners and their lapdogs in the mainstream media are pushing an anti-gun narrative using school shootings as one of their primary reasons for gun control, but we don’t ever hear them talking about teaching your kids how to defend themselves, about how to teach them situational awareness so that they can stay out of many dangerous situations. And those are much more likely to be situations which our kids will need to deal with.

Let’s be honest here: anti-gunners and the mainstream media are simply about their narrative and not about the truth, and we need to tell the world.

Should This ‘Old Reliable” Be Your Next CCW Buy?