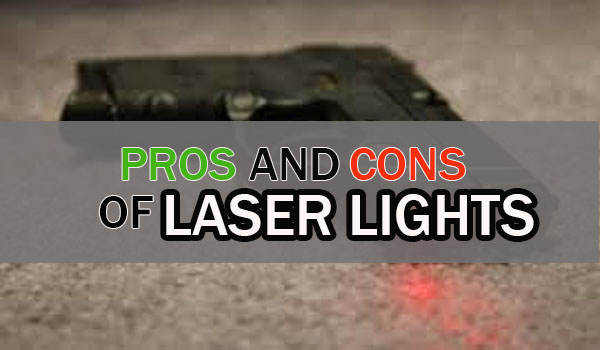 One of the “cool” modifications you can make to a firearm today is to add laser sights.

They make military and civilian versions of infared (invisible) lasers too but we’re talking about visible light ones. They are available in red or green, with green being much brighter, making it possible to see even in daylight.

There’s a debate raging over the use of these sights, basically between people who are selling them and serious firearms instructors. Of course, the sellers are talking about how much easier they are to use, while the firearms instructors are essentially pooh-poohing their claims.

I’ll have to say that a lot of the interest in laser sights has come from Hollywood, who loves to use them simply because it looks cool. Who hasn’t seen some bad guy with a red spot in the middle of their forehead, looking up as if they could see it?

Let me tell you two secrets about that. First of all, if it is on their forehead, they can’t see it; and secondly, nobody can hold their gun as steady as it looks in the movies, your laser sight is going to move around a bit.

Having shot both with laser sights and without, let me see if I can clear the air.

With iron sights, the focus is on the front sight of the gun, with the rear sight and the target out of focus. On the other hand, with laser sights, the shooter focuses on where the laser is hitting, the target. That keeps the attention of the shooter downrange, which is an advantage.

With normal bifocals, it can be hard for someone to focus on the front sight of the gun. With a laser sight, you can shoot with normal glasses or bifocals. So, if you suffer from poor vision, you may want to consider using a laser sight.

As far as other benefits, I’ll let Todd Green give his two cents as I’ve not found anyone with more experience who shoots both with and without laser sights. Todd is a ridiculously experienced pistol shooter, and 15 years ago had already put 10,000 rounds of dedicated laser training and practice in with the Crimson Trace LASERGRIPS and this is what he had to say on his forum (my comments in brackets):

The two biggest benefits in my mind are:

1. Ability to aim the gun precisely and quickly even when target focused.

Under stress, it’s very hard to overcome the natural tendency to look at your threat instead of your front sight. I practice a lot more than most folks and even for me, today, there are times in a FOF [force-on-force] scenario when I’ll break shots without a front sight focus… not on purpose, but because Byron screaming around a corner unexpectedly with gun a-blazin’ just sort of demands visual attention.

While I would never count on it, both CTC and many LE agencies issuing/authorizing lasers (including the U.S. Military) have numerous documented cases of BGs [“bad guys”] who did not respond to guns pointed at them but immediately ceased hostility when a red dot appeared on their chests. It’s been suggested that many BGs, whether career criminals or veteran soldiers, get guns pointed and even fired at them all the time… obviously they survived so the fear of a gun is small. But no one mistakes the seriousness of a red dot over his heart. AgainI am not suggesting this is a sure thing or even something I consider as part of my “tactics.” But if it just happens to save me the trouble and expense of having to shoot someone, it pays for the CTCs a hundred times over.

Laser sights do have their drawbacks though.

First of all, they tell the bad guys where you are. The eye is attracted to light, so when they see that red light floating around, they’re also going to see where it is coming from and possibly take a shot at you, before you know where they are.

(It’s important to note that someone looking at you will only see a bright red “dot” — not a continuous “laser beam” like they show in Hollywood — unless the air is filled with dust or some other particles to make it visible. But it’s still a bright dot in your hand.)

If you do decide to get a laser, you’ll have to practice “light discipline” like you would if using a weapons mounted light. For example, you might not want the laser on while clearing the house — because it could give away your position — but you want it on when you’re bringing the gun up to shoot. Grip activated lasers, like the Crimson Trace LASERGRIPS, have an advantage in this regard.

Secondly, batteries have a tendency to go bad at the worst possible times. Thankfully, like most optics, the batteries have become smaller, more powerful and longer lasting, but you must remember to update them for sure.

But the biggest problem with laser sights is that regardless of how easy they look to shoot with, it’s not a crutch and you must learn to shoot with your iron sights as well …

If you choose to use a laser sight, you’d better know how to use your iron sights as a backup. What if the laser goes bad?

That means learning and practicing two different ways of aiming your guns, as well as being able to switch between the two quickly. Make sure that you take this into account, that you’ll practice with and without the laser — it’s an increase to your training time for sure.

7 Tips For Armed Citizens To Fight Terrorists (By Massad Ayoob)

The Sick Reason Liberals Are Dancing on Scalia’s Grave