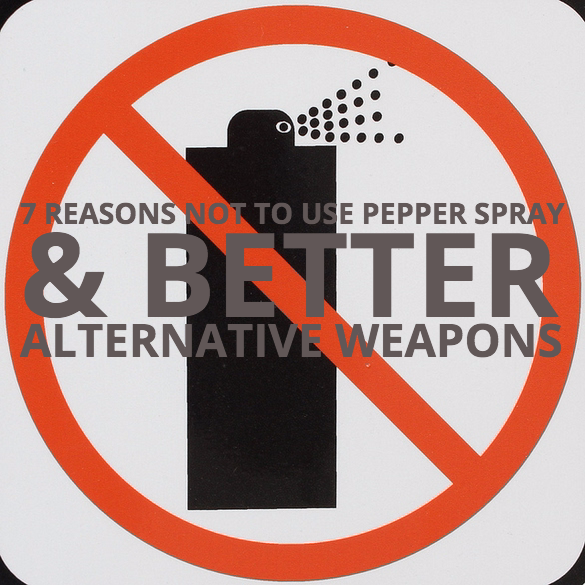 What About Alternative Weapons?

There are a lot of people talking about alternative weapons these days. I see articles written about anything from PVC bows to using tear gas against an armed invader.

I honestly have to wonder about some these authors, if they really intend on depending on what they wrote about to keep themselves alive. If not, why are they writing it?

There’s a reason why guns are the weapon of choice for both good guys and bad.

That’s because they are the most dependable, easiest to use and most effective weapon available for the average citizen to buy. Grenades might be more effective in some situations, as well as flame throwers, but those aren’t really all that easy to come by. Besides, you have to have a special license from ATF to own them.

The point is, a 90 year old, frail, weak, grandmother has the strength to aim a Glock and pull a 5 pound trigger at a 250lb pissed off, blood thirsty, prison hardened gang banger — and that bullet will still be just as effective at stopping the threat as any other.

Using anything less than a gun means that you’re giving the advantage to the enemy. The bad guys will most likely be armed with guns, so if you have something less, they will definitely have the advantage.

Of course, that’s what liberals are trying to do, take the guns away from the good guys, which means that only the bad guys and the government will have the guns. If that were to happen, we will be nothing more than victims of one group or the other.

So, does this mean that there is no place for any other types of weapons?

Not necessarily. As I just mentioned, the liberals are still trying to take away our gun rights and aren’t likely to give up. If they ever get control of both houses of Congress again, along with the White House, they might just succeed in making our guns illegal. If that happens, we’ll need something else.

There’s another reason to have alternate weapons as well. That’s for the time when you can’t use a gun. You might be in a situation where using a gun would put family members at risk.

I can’t see shooting a bad guy that’s holding my wife or daughter, unless it’s a last resort, can you? What if you’re holding a rifle and shooting them means that there’s a chance that the bullet might pass through the bad guy and end up in a family member; can you shoot them then? It might help to have some alternatives.

Having said that, it’s not enough to just own those alternative weapons, you have to practice using them.

They aren’t going to be the least bit of good, if you can’t use them effectively.

Go ahead and get some alternative weapons if you want to. Put them in strategic places around your home. But learn how to use them effectively.

You Are a Criminal In a Mass Surveillance World – Here’s...

Now Your Child’s Doctor Is Being Used For Gun Control

The Tiny Pistol That Could Save Your Life