Home News 3 Reasons Why Obama Was The BEST President America EVER Had For... 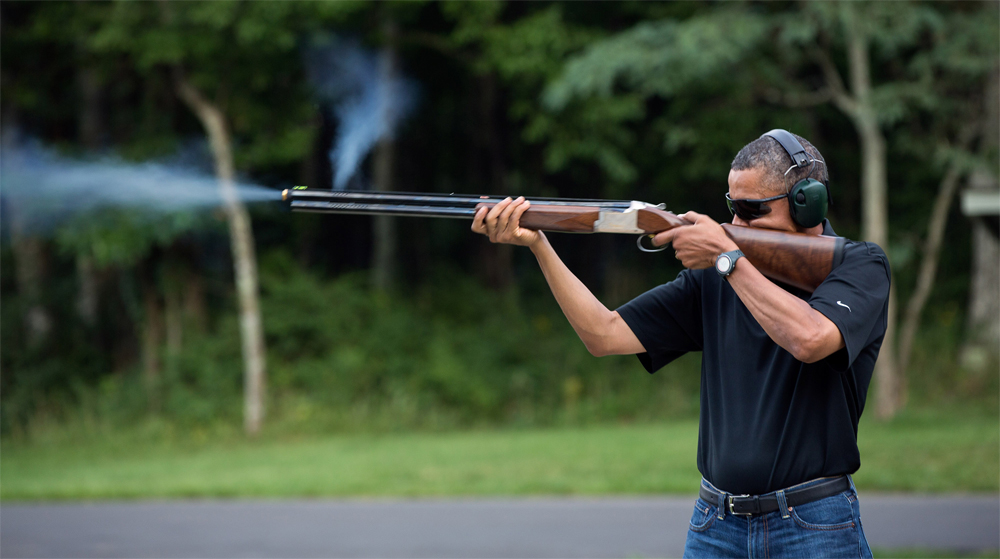 What I’m about to write is going to sound like heresy.

And if you’re an idiot, you’ll read the headline of this article and skip to the comment section to leave your thoughts without even reading my article.

If you’re NOT an idiot, you’ll read what I wrote and find you agree with me.

As Obama prepares to vacate the White House and President Elect Donald Trump prepares to move in, I find myself reminiscing on the legacy that Obama has left America with.

The good, the bad. Everything. And I smile to myself as I realize Obama has been the BEST president America has EVER had for gun owners.

I have to admit, I never paid much attention to national politics before Obama.

There’s a simple reason why too: even today, your “internal economy” is much more important than anything going on in the world around you. In other words, you can safely ignore 99% of the “news” and just focus on what YOU can do and YOUR mindset and be incredibly successful in today’s world. That’s because half the crap they print as news has no bearing on your life and is designed to keep you crippled by fear.

Obama Cured Many Gun Owners Apathy And Drove Them To Action!

When he did his dead level best to try to ban guns towards the end of 2012 he so inspired me … that he led to the creation of this entire business and eventually the website you’re reading right now!

He got a LOT of NRA members and other pro-gun Americans to get OFF their butts and call their Congress critters and act out in other ways that were pro-gun.

In short, because Obama hates guns so much …

He has cured millions and millions of Americans of their apathy and drove them to start taking their gun rights seriously, to get more politically active, to get more guns, to get more training, and to be more prepared.

All that had an effect.

And it drives President Obama MAD!

“If you ask me where has been the one area where I feel that I’ve been most frustrated and most stymied, it is the fact that the United States of America is the one advanced nation on earth in which we do not have sufficient common sense gun safety laws.”

In short, because so many pro-gun Americans were “inspired” by Obama’s hatred for American gun rights that NO new gun laws were passed under Obama.

Sure, he tried to do a lot of “Phone and Pen” Executive actions but many of them — while annoying — did very little to affect gun rights. And on the upside, because they’re executive actions they could be repealed just as easily by future presidents.

Reason #2: Obama Is 100% Certified The Greatest Gun Salesman In The History of The World! 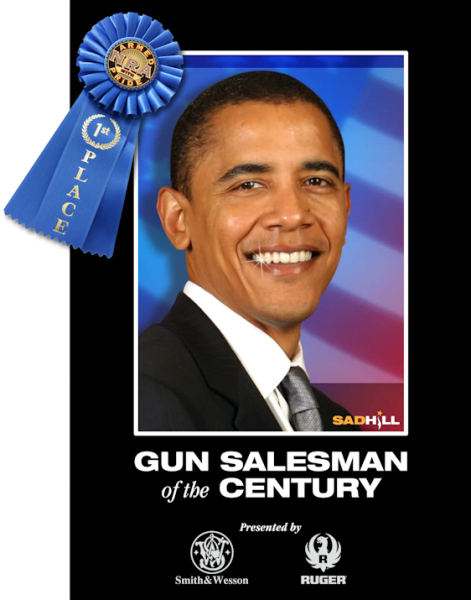 And even drove many people who had never considered owning a firearm before to make their first purchase!

This is absolutely wonderful.

Along with that, the incredible growth in the firearms products and services market has been outstanding!

Everything from AR-15’s and their tactical accessories … tactical nylon … custom kydex holsters … tactical gun training … tactical shooting sports … aftermarket customization to Glocks and other handguns … the list goes on and on and on!

This has led to a ton of veterans coming home from the Global War on Terror (GWOT) being able to start businesses that have benefited Americans everywhere and the economy in total.

According to Forbes, the gun industry says it has grown 158% under Obama.

The National Shooting Sports Foundation (NSSF), the trade association for firearms manufacturers, reported that the total economic impact of the firearms and ammunition industry in the U.S. increased from $19.1 billion in 2008 to $49.3 billion in 2015. The NSSF also reported that, in that same time period, the total number of full-time jobs related to gun making in the U.S. rose from about 166,000 to almost 288,000. 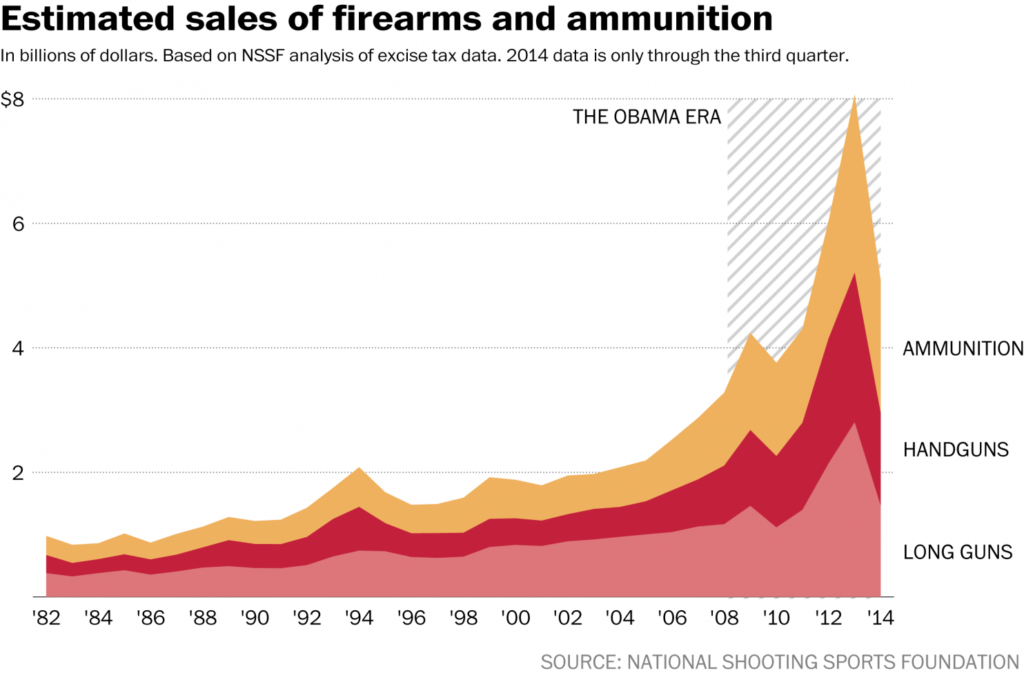 All this has led to an incredible increase in gun sales under President Obama!

Under President Obama, gun sales in in the United States broke record after record. 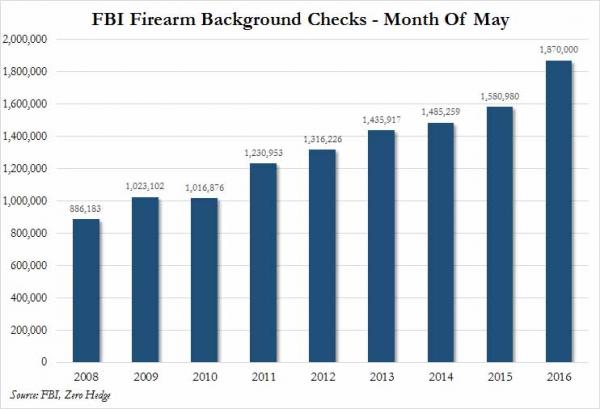 On Black Friday alone, I’ve read enough guns were sold to private Americans in the United States to outfit the entire Marine Corps!

Under President Obama, the private stock of firearms in the United States will have increased from about 308 million to over 405 million firearms by most estimates.

In short, President Obama has been the greatest gun salesman in HISTORY!

Reason #3: Concealed Carry Has Grown More Under Obama Than Any Other President In History! 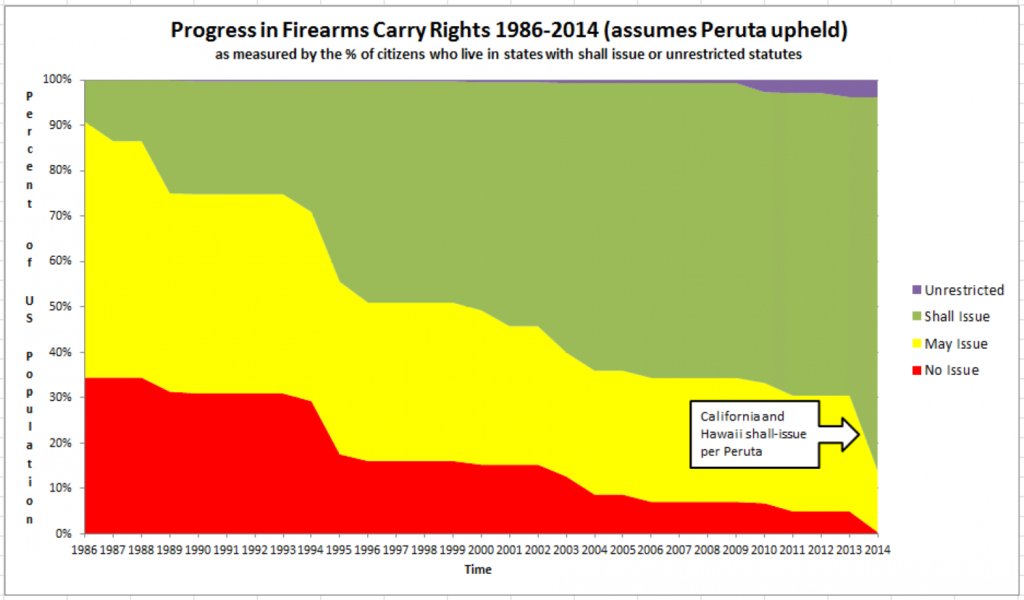 Barack Obama wasn’t just a great gun salesmen, he also presided over the largest increase in concealed carry permits in our history.

That doesn’t even include the states where NO permit is required. Which is what we all want, true “Constitutional Carry”.

A 2016 report from CPRC is packed full of facts the mainstream media would rather you not know. The bottom line is that the number of Americans choosing to arm themselves outside of their homes is exploding.

During President Obama’s administration, the number of concealed handgun permits has soared to over 14.5 million – a 215% increase since 2007.

To give you an idea …

In short, under Obama, right-to-carry laws have benefited to the point where there is NO state in the union that does not have some form of carry law because it was proven that it’s a constitutionally protected right.

Now, all fifty states have passed laws allowing qualified individuals to carry certain concealed firearms in public, either without a permit or after obtaining a permit from a designated government authority at the state and/or local level.

That has NEVER been the case in the history of our modern American government!

Sure, some of these states make it so hard with their “may issue” regulations that it’s practically impossible to get a permit there but those states will eventually fall too. They’ve already been beaten into submission by higher courts that they MUST allow some form of right-to-carry now they’re just twisting the rules as much as they can to have defacto regulations. Eventually those states will get legally challenged and more.

Conclusion: President Obama Has Been The BEST President For American Gun Owners In History!

Since the first time President Obama stepped foot in the White House, he has inspired America to reverse that trend.

Now Trump is heading into office.

So what’s it going to be fellow American?

Are you gonna relax now because “your guy” is in office and you don’t think you need to fight for your rights anymore?

Or are you gonna continue to pound the ballot box and raise holy hell with your Congress critter and make it so that Trump’s presidency completely overshadows President Obama’s legacy as the greatest gun salesman in history?

It’s up to you! SHARE this article with all your gun-loving friends and let’s make America great again for Gun Owners 🙂

This is WAY more important than any gun, gear or martial...

VA Libertarian Party Is 2/3 Of The Way To Funding Recall...

1 Must-Know Technique to Keep Guns Away From Children While Making...