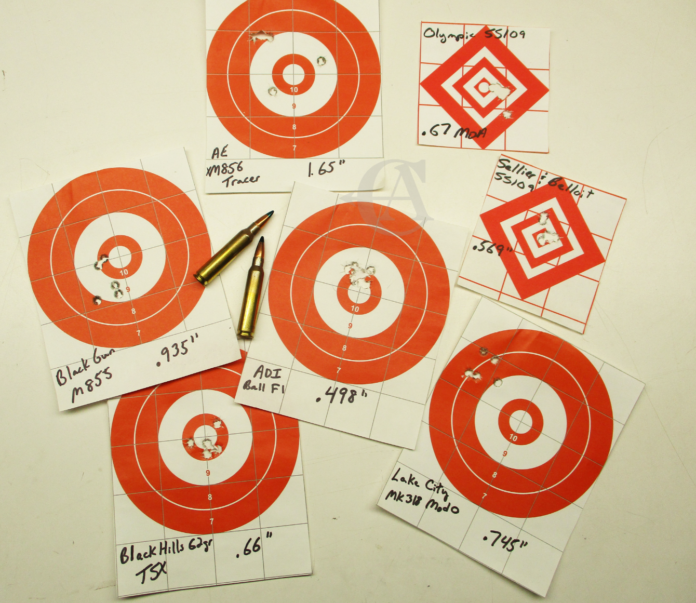 You do not often see the three words in this article’s title used positively in the same sentence. Even so, I doubt that I am the only one who has discovered that certain M855 (and NATO SS109 equivalent) loads are actually good shooters. When I was still a G.I., one “Green Tip” round was as good (or bad) as the next and if I happened to shoot a decent group once in a while, I figured it was a fluke. M855 was designed with light machine guns like the M249 SAW in mind and the various M16 platforms played second fiddle in that equation. As a Soldier I mainly concerned myself with reliability, holding zero and hitting people-sized targets at reasonable distances whenever I was armed with a 5.56x45mm firearm. Although I was blessed to have access to accurized rifles and 77 grain, match-grade 5.56mm ammo, I usually carried 7.62x51mm sniper rifles and carbines due to a need to deal with things both near and far with a much higher degree of accuracy than was possible with my 5.56 guns.

Since retiring from the military I have discovered that US-made M855 is at the bottom of the accuracy heap when compared to some foreign equivalents. Many sources for this ammo have been made available from both commercial manufacturers and US surplus stocks in recent years, thanks in part to the US Army and more recent USMC transitions to the M855A1 EPR load.  My opinion of the original M855 projectile’s lethality is overall positive but I won’t retread that well-worn ground here. Instead I will simply share the results of a pair of tests I conducted a few years ago. The first was a comparison of eight loads that I purchased on the commercial market, looking specifically at reliability, accuracy and velocity. I followed up that test with a second evaluation of six more 62 grain loads that I wanted to test against the first batch. Three of those were actual M855 variants, two were improved munitions issued to various US military elements and one was a purely commercial cartridge. All fourteen loads tested were available on the retail market at the time of testing, either as factory-new or surplus ammunition. I continue to shoot the best of these loads today and see the same (or better) results time after time.

The US military surplus loads for both tests had the case mouth and primer sealants you would expect to see in ammo loaded for uniformed service. One type—XM856 tracer—was repackaged in commercial boxes under the American Eagle brand. One of the tested foreign ammunition brands (Olympic) no longer appears to be available. Two loads that I wanted to include were unavailable at the time: Radway Green (UK) and IWI (Israel).

Before I dive into the test methodology and results, a little background about the M855 cartridge is in order. NATO adopted SS109 around 1980 as the standard 5.56x45mm load. The 62 gr projectile is of Belgian design and uses a closed-nose, copper jacketed, lead core. A steel penetrator is incorporated into the core during the manufacturing process, which helps this bullet penetrate very thin, mild steel out to medium ranges. M855 is not an armor-piercing round and is perfectly legal to own as far as the federal (and most state) government is concerned, but be sure to check your local laws before you buy a bunch. As a general rule of thumb, the more components you jam into a bullet, the greater than chance for inconsistencies from one projectile to another due to tolerance stacking. It is apparent from my accuracy testing that some manufacturers are more careful than others in this regard. One great thing about 62 grain projectiles is that they fly very well through all of the common .224 bore twist rates—1:7, 1:8 and 1:9—as well as less common rates like 1:6 and 1:10. Overall, 62 grain bullets are capable of excellent accuracy and carry enough mass to be effective for defensive purposes.

I used a Citizen Arms Eastern Predator 16” carbine as the test bed for this effort. This is a fighting gun but its 1:8 twist, .223 Wylde chamber, mid-length gas barrel regularly shoots BlackHills 55 gr FMJ and 77 gr Match ammo into sub-3/4 MOA groups at 100 yards. I used an older model Bushnell 1-6.5X first focal plane scope for the tests covered here, with all grouping done at 6.5x. Muzzle velocities were measured using an Oehler 35P chronograph. The old ATK data sheet for M855 shows a velocity range of 3000 (+/-40) fps. Presumably that number is obtained through 20” test barrels. Five of the M855/SS109 loads showed muzzle velocities within ATK’s acceptable range when fired through my 16” gun.

Two points should jump out of the results in the attached table, which combines the two sets of test results. First, average muzzle velocity is in no way indicative of 100 yard accuracy. Velocities are scattered throughout the results, which are listed according to accuracy rank. Higher velocity cartridges gain their edges further downrange due to less time for gravity and wind deflection to affect trajectories. In many cases—Green Tip included—high velocity also equates to more tissue damage due to specific projectile design characteristics. Sometimes this is intentional and sometimes it comes by fluke, as with the M855 projectile’s cannelure, which often serves as a high velocity fracture point. Handloaders well know that pushing things to go faster often results in diminished accuracy, so a balance between velocity and accuracy with any projectile and barrel combination must be found. The second notable finding was that the lowest standard deviations (SD) in muzzle velocity did not take all the top slots in accuracy ranking. At least one very low SD ended up near the bottom of the pecking order too. While any chronograph results are suspect in my eyes, velocity testing of other loads since these evaluations has yielded the same result from time to time. Even so, I would expect those loads with greater velocity SDs to experience more accuracy degradation at longer ranges.

The rest of the results speak for themselves. Either I happened upon a one-of-a-kind batch of Aussie F1 or the folks who brought us great phrases like “G ’Day” and “How ya goin’, mate?” have figured out how to make great shooting military fodder. If the stuff I have is truly representative of ADI’s F1 performance, the folks at Lake City Arsenal should be frog marched onto a C17 and flown Down Under for a watch-and-learn trip.

BlackHills Ammunition’s 62 grain TSX also did very well, which is good news since it is intended specifically to deal with bad people and/or critters that need dealing with. This load is available on the commercial market and is an excellent cartridge for defensive and hunting purposes. Barnes’ Triple Shock “X” bullets are legendary and have acquitted themselves well in game as well as in battle around the world. One of the really great things about TSX is that it continues to expand very well at decent ranges (out to approx. 300 yards in 5.56) where other expanding projectiles turn in FMJ-like performance. A nice side benefit of Blackhills’ 62 gr TSX load is that it has a trajectory that is very close to most “Green Tip” loads out to 300 yards/meters. So, keeping one or two primary magazines loaded with this more expensive ammo and backed up by additional mags of surplus stuff is not a wallet-emptying prospect.

The two MK318 Mod 0 variants were developed for a USSOCOM program that sought ammunition which could penetrate barriers without breaking up while also performing well in tissue on the other side. Their averages here were respectable, coming in the same neighborhood as most of the foreign M855 loads tested. They also outperformed all US-made green tip loads. Not surprisingly, XM856 Tracer was near the bottom of all loads tested. I don’t think you can make a projectile that changes weight and balance in flight (by virtue of the tracer’s burn) and expect it to be consistent. Sadly, these orange tipped fire-starters still outperformed the Winchester M855 ammo that I tested. I have a bunch of Lake City M855 ammo but I never use it for any pursuit that requires decent accuracy. Over the years I have had such abysmal performance out of Winchester’s load that regardless of how low it drops in price, I will not buy it.

No malfunctions were encountered during either phase of testing. My rifle’s barrel and chamber were cleaned between brands and time was spent re-zeroing each load. A total of 90 rounds of each ammo type were fired, for a total of 1260 rounds. While far from comprehensive, this comparison provided me with a decent snapshot of what to expect from each product. In the years since I first conducted these tests, I have fired large amounts of the PMC and S&B Green Tip loads, as well as the Blackhills TSX cartridge. All three have continued to shoot with fantastic results—so much so that I regularly use one or more of them when testing the custom guns and uppers I build for accuracy. 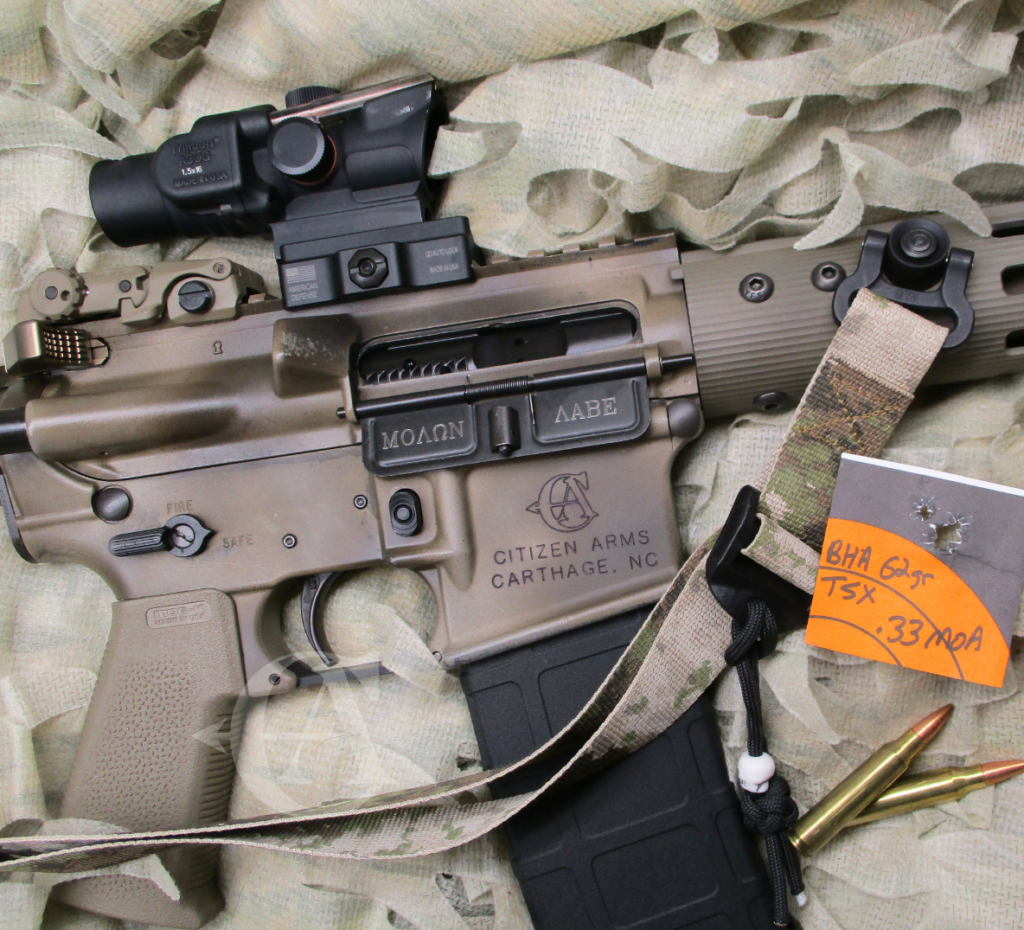 Recently I mounted a 1.5x mini ACOG on the same 16” gun used for these tests and proceeded to shoot my best groups to date with that rifle, including a five-shot, .33 MOA group at 100 yards using Blackhills’ 62 gr TSX.

Whether you stockpile Green Tip ammo or just have a 5.56 barrel that shoots 62 grain projectiles well, you will be happy to know it is still readily available on the commercial market. But that supply is finite. Eventually all the surplus overruns will run out as countries shift away from it in favor of better-performing, environmentally safer or more politically correct projectiles. Remember to check your local range rules, as many do not allow M855 to be fired due to increased target wear—especially on steel. As these tests show, there are many options for accuracy and special purpose needs. If you and your rifle are up to it, many of these loads will fly where aimed and do what they were designed to do out to moderate distances. 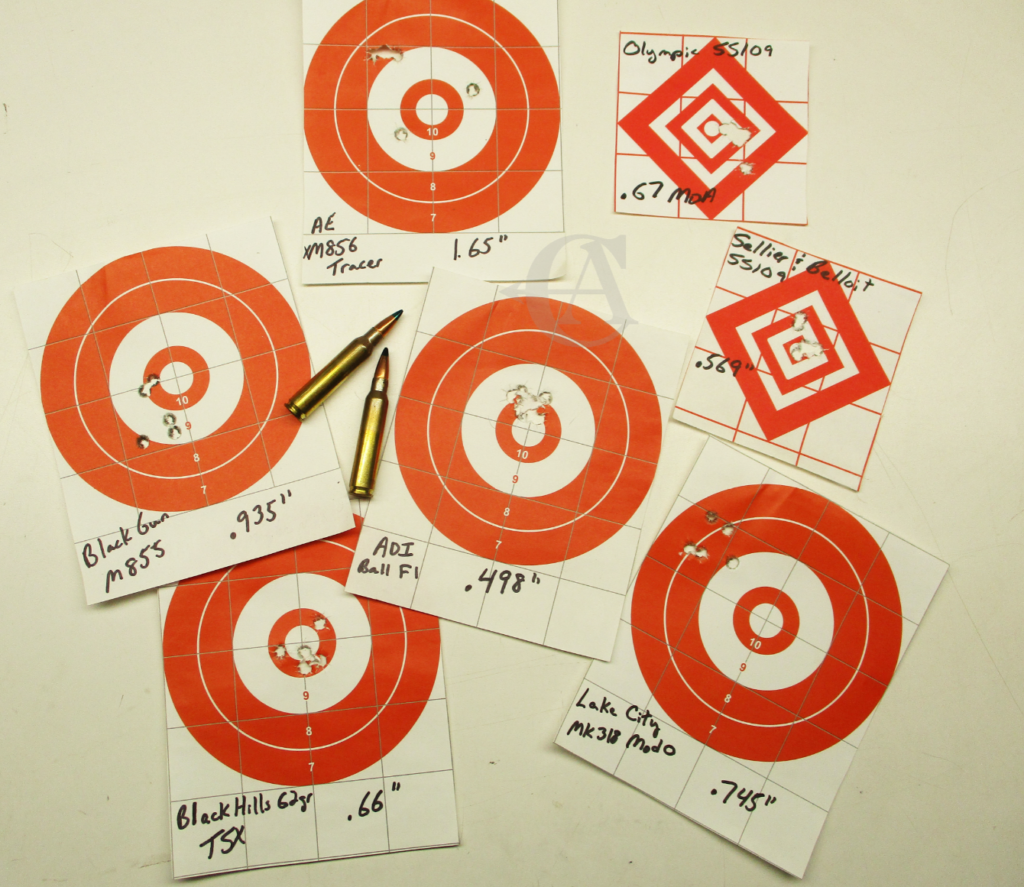 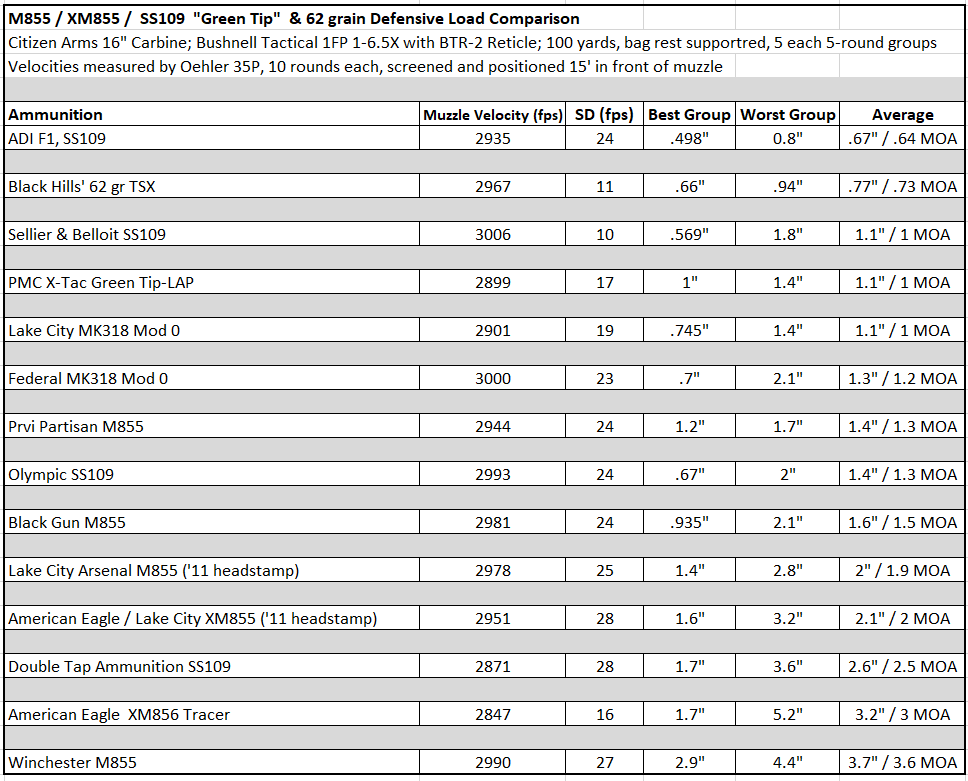 [Editor Note] Click The Links Below To Buy The Tested Ammunition Online: