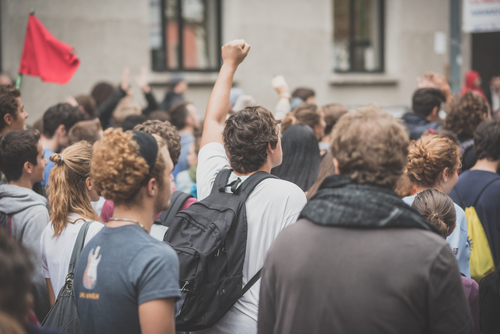 Anti-gunners love to make accusations about pro-gun rallies and movements. These anti-gun zealots talk about how the pro-gun movement is funded by big businesses and organizations who want to, in their thinking, destroy America.

In fact, anti-gunners make these accusations so often that it can begin to sound like a pot-calling-the-kettle-black situation. In other words, the accusations are so common that you might be thinking that anti-gunners are trying to cover up the fact that their movement may not be all grass roots and funded by the common man.

And, if you think that, you’d be right.

Except that these protests were not grass roots or organized by students. Victoria Taft writes,

Public documents obtained by a Portland attorney reveal that Portland Public School staff, planned, executed and paid for what the media and the school district branded as a ‘student’ anti-Second Amendment protest last March 14th.

Willamette Week reported at the time:

Portland students at Roosevelt High School in North Portland, Lincoln in Southwest, Cleveland in Southeast, Franklin in Mt. Tabor and Sunset High in Beaverton were a few of thousands around the state, and nation, protesting for an end gun violence.

Many of the morning’s demonstrations included sitting for 17 minutes in silence—one minute for every person shot in the Florida school shooting. At Lincoln High, where Mayor Ted Wheeler was present, 17 desks were situated with 17 roses on them.

It was followed up by another one in April in which students were given time off to protest.

Portland’s protest community, or as I call them Portland Professional Protesters, Incorporated,™ permeate the community, especially in government – teaching – and quasi government non-profit jobs. I wouldn’t be too far off in suggesting that they leave school on Friday afternoon to join a drum circle by 4pm and then don a balaclava for the evening’s Antifa destruction. There is no chance they don’t bring their far Left politics to the schools. No chance. This is the state that adopted the law – offered by a teacher – to register underage voters. They call it “pre-registration.”  Gee, I wonder what political organization they align with.

The Oregon Firearms Federation, a civil rights and education group, said that the local attorney who obtained the records found that the district had orchestrated everything:

In response to a Public Records Act request, PPS has now released documents showing that the demonstrations were organized by PPS, and involved a massive dedication of school resources.  From the School Board (which passed a resolution calling for a ban on the possession of all semi-automatic weapons) on down to the individual schools (which reprogrammed class bells to create a special protest period, so no one would have to be marked absent from class), the entire Administration organized itself to undermine the core of our Constitutional republic.

Attorney James Buchal, who also serves as the Chair of the Multnomah County GOP, told VictoriaTaft.com that the school staffs are using kids as political human shields:

“The Portland Public Schools exploited students to manufacture political pressure for gun control, camouflaging their own anti-gun agenda as private speech by students.”

As OFF put it:

[Buchal] is seeking PPS parents and students who are willing to step forward and serve as plaintiffs in a lawsuit seeking to enjoin PPS from further political indoctrination at taxpayer expense.

Buchal says the political pressure on students in these “indoctrination factories” is onerous. He told OFF:

[U]nless parents rise to confront these indoctrination factories, America as we know it will be gone in another generation or two…

Buchal told VictoriaTaft.com that, so far, no parents have stepped forward to be plaintiffs in the case, but Buchal says they can reach him at  jbuchal at mbllp.com.

Could This Old West Gun Fighting Secret Save Your Life?

1 Sheriff Gives His Thoughts On The Placement Vs Caliber Controversy

These 145 CEO’s Of Companies Are Begging Congress To Take Your...