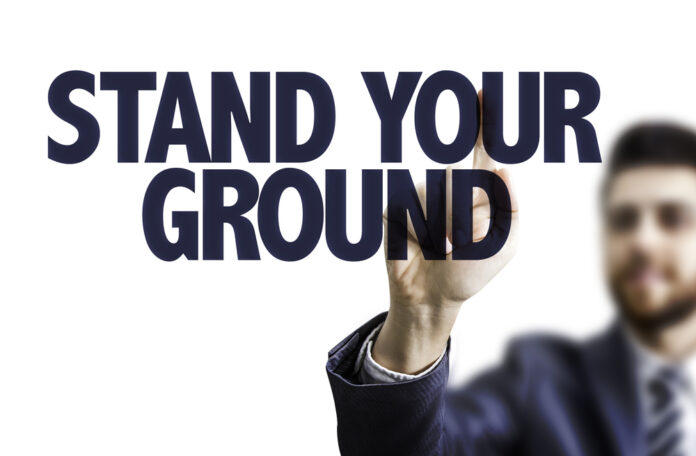 Stand your ground laws are one of the laws on the books in many states that leftists hate. They just hate them.

Why? Because stand your ground laws allow a gun owner to defend themselves when threatened by limiting the potential anti-gun retaliation against a gun owner simply trying to save their own life.

Of course, anti-gunners say that stand your ground laws give gun owners a license to murder, but let’s be real. You don’t need a license to get away with murder with a gun. It happens everyday in gun control paradises like Chicago and Baltimore. Remember, it’s not legal gun owners who are typically the causes of violence (not by a long shot). No, it’s those who have guns illegally who are the ones committing crimes.

So, now, the Ohio legislature passed a stand your ground bill and, at the time of this writing, Ohio Governor Mike DeWine has yet to sign or veto the bill though he had pushed for some gun control after a mass shooting in Dayton, Ohio. Thus, it’s unclear if he’ll sign or veto the bill. Laura A. Bischoff writes,

A controversial “stand your ground” gun rights bill is heading to Gov. Mike DeWine, a Greene County Republican who promised to push through gun reforms after the mass shooting in Dayton’s Oregon District.

The Ohio House voted 51-31 late Thursday in favor of the measure. The Ohio Senate voted 18-11 on Friday. Four Republicans, including state Sen. Peggy Lehner of Kettering, joined Democrats voting against the bill.

Under current law, Ohioans have a “duty to retreat” from danger in public places before using deadly force in defense of themselves or others. Senate Bill 175 would remove that duty.

“Stand Your Ground” is opposed by many county prosecutors and police chiefs, including Dayton Police Chief Richard Biehl, who said it would make communities less safe and encourage armed vigilantism.

But state Sen. Terry Johnson, R-McDermott, said it’s a simple change that will clarify self-defense law and he disputed the “stand your ground” label.

Sending the bill to DeWine puts the governor in a difficult position. DeWine has been non-committal on whether he’d sign or veto it.

It’s no surprise that anti-gunners whined and gnashed their teeth about this bill and said that it would make gun violence worse, which is complete and utter nonsense. Responding to the idea that stand your ground laws make gun violence worse, Tom Knighton writes that stand your ground laws have “done no such thing where [they’ve] been enacted.” And Knighton is right.

We’ll just have to see whether DeWine will side with common sense and liberty and sign the bill into law or whether he will cave to hysterics and nonsense and veto the bill.

Can You Guess Which City Saw FULLY AUTOMATIC Gunfire? [Video]