Home Guns What’s Different About Tactical Shooting & Why Should You Do It? 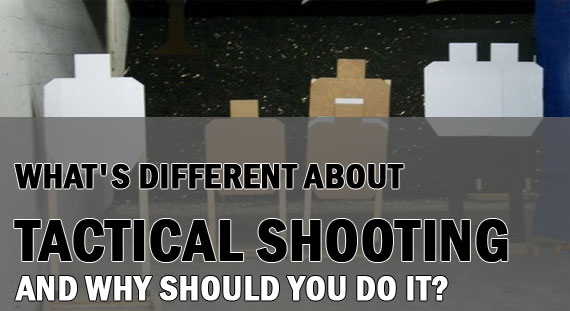 If you’ve been going to the shooting range to practice, I applaud you.

You know, bad guys don’t just stand there at 5 to 7 yards, waiting for you to shoot them. They have a tendency to do all sorts of things to make you miss. If all you’ve ever done is shoot at a fixed target at a fixed range, you’re going to have a rude awakening when things turn real and you’re using that gun to make sure that you and your family can survive.

That’s why you need to do tactical shooting, in addition to target shooting.

Many shooting ranges offer tactical shooting events, where you can fire a tactical course, designed to simulate a real-world shooting scenario.

Tactical shoots are done against the clock, so that only one shooter is on the line at a time. This is important for safety, but it also adds an element of realism in that a real life situation will have to be dealt with quickly. You won’t have time to make sure your stance and grip are perfect. You may even end up shooting instinctively, without getting a proper sight picture. The idea is to get the bad guys, before they can get you.

So, in a tactical shoot, you’ll find:

*** Targets at different distances – Nope, they don’t line up for you

*** Moving targets – If you’re shooting, you can be sure that the bad guys are either going to charge you or try to get out of your line of fire

*** Shooting while moving – Just like the bad guys are trying to get out of your line of fire, you should try to get out of theirs

*** Shooting from cover – You definitely want this. Being behind cover makes you a poor target

*** Shooting targets that are partially covered – The bad guys will try to hide as well, just to make your job harder

*** Low lighting – Bad guys like to work at times when they can’t be seen easily. It makes it easier for them to beat the rap if you can’t identify them

There are endless ways of combining these elements, making each scenario different.

Unlike a video game, you don’t get to practice the same moves over and over until you get them right. You’ve got to get it right the first time. That means moving the right way, shooting the targets in the right order and even picking the right time to reload your gun.

All these elements will make a difference that one time when it all turns real, so by practicing in some tactical training, you are making yourself ready to deal with them, when the time comes.

Look for these types of tactical shooting events at ranges near you. You might look into the “Practical Shooting” associations too who hold these types of events on a regular basis, allow you to become a member and compete against others such as IDPA, IPSC, USPSA, 3-Gun, 2-Gun, and others.